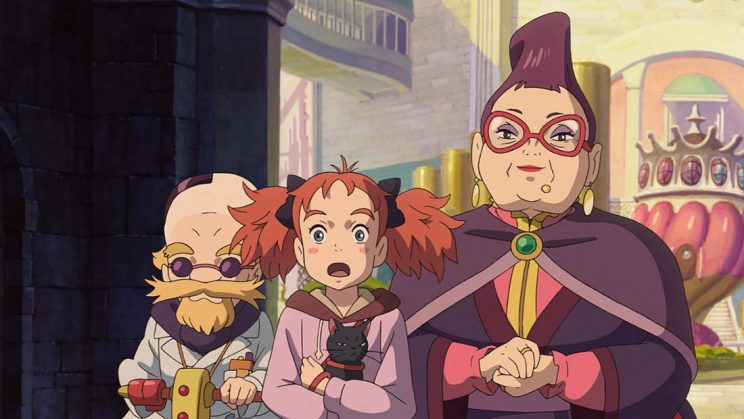 I never do Fathom Events. I find that they charge more for the activity than they need to, like $15 or $30 or $50 (and for that sum, I’d better be sitting in a hot tub of soda!) and it is usually in some out of the way venue at some godawful time, so I would have to drive to East Powdermilk, Wisconsin, to catch a 2 am showing of “The Incredible Stinking Blob from Galaxy X”….with director’s commentary! But when they did a recent offering of the latest anime movie, it wasn’t too costly, at a convenient location and at an acceptable time, so I grabbed it. But, before we can go into the review, a bit of history about the production house.

Studio Ghibli closed its doors in 2014, but a lot of the talent there felt they had more to give, so they started a new company from the ground up. This is Studio Ponoc. Hmmm….’Ponoc’ is not a Japanese name, and you are right. It’s Croatian and means ‘Midnight’. So why not use the Japanese term for it? Well, Studio Mayonaka sounds too much like ‘mayonnaise’, so that is out. But why Croatian? I guess Studio Minwi or Studio Phakathi Kwamabili just didn’t have the same ring. Then, why Studio Midnight? Aside from it being the witching hour, it is also the demarcation line between the end of the old day and the start of the new day, and everyone felt that they were on the cusp of a new day in what they wanted to do and show, so we have their first offering “Mary and the Witch’s Flower” (“Meari to Majo no Hana”).

Now, even though there is a strong Japanese magical/spiritual influence, the film is adapted from the Mary Stewart book, “The Little Broomstick”, so we are moving to other lands, in this case, the British Isles. We appear to be in the Lake District in about the 1950s. It’s a guess. They are odd in England, as they use things up until they can’t be used anymore, so who knows when it is. It’s just the modern technology isn’t there (no cell phones, no flat-screen TVs and no video game systems) and the clothing comes from that time, so it’s an assumption. There may have been a vintage clothing store in town, OK? It’s too fluid.

Mary Smith (Mary Smith? Really? Why not name her ‘Jane Doe’!) and her family is moving into great aunt Charlotte’s English country manor. Well, some of them are. Mom and Dad are hopelessly delayed, so it is Mary, Charlotte and Mrs. Banks, the hired help. Now, Mary is possessed of the worst hair ever. Aside from it being red, she can’t do a thing with it. It is wild and unkempt and keeps its own schedule and will do as it wishes. I laugh at your brush, ha, ha, ha! Mary, who is bored, as it is about a week before school begins, tries to be helpful, but her zeal outpaces her effectiveness, so she is more of a liability than an asset.

She tries to make friends with the only person her age, Peter, who is the local delivery boy, jack-of-all-trades (they both appear to be about 12 or so), but he thinks girls are kind of icky and Mary moreso. Left to her own devices, she wanders about the countryside. Perched on a hilltop, overseeing the dell, she makes friends with a black cat (we later learn this is Peter’s cat, Tib) who takes her into the woods that ring the hills, where she finds a strange and rare flower. She shows it to Mr. Zebedee, the gardener, who calls it a Fly-By-Night, remarking it is a rare plant, blooming once every seven years, and in hidden locations. In fact, this is the first time he has seen it and he’s an old codger.

Later that night, a weird mist covers the forest and people are too nervous to go into it, owing to rumors of evil afoot. Tib needs Mary’s help to find his mate, Gib, and the next day, they enter into the forest again. Mary finds an old broom, hidden under a wild growth of plants. In freeing it, Tib throws a bulb from the plant at Mary. She accidentally crushes it and she is bathed in a blue light that gives her magical powers to fly the broom and go to Endor College, an institution of higher learning for all things magic, way above the clouds.

She encounters Headmistress Madame Mumblechook and Doctor Dee, who are impressed by her abilities and can’t wait for her to attend. And here is where the real adventures begin.

Now, say what you will, but this is still Studio Ghibli for me, so that means you have magnificent backgrounds and design elements. The hills about the village and Charlotte’s garden are a joy to behold. The college is stunning in its layout and execution and when magic is used, it is, well, magical, in both form and function. It is genuinely whimsical in how events at the college are presented without it being cloying, which contrasts to the dark and sordid nature of some Ultimate Experiment that the Madame and the Doctor are embarked upon. And here is where things go astray.

Mary looks like almost every other Studio Ghibli heroine they have used, closer aligned to Ponyo, and the Madame isn’t much different than Yubaba from “Spirited Away’ (what gives with the wart?) and if you wanted to do any Harry Potter references, Madame is a mix of Dumbledore and Umbridge, whereas Doctor Dee is the Snape nexus of personality. Flanagan (I think he’s a tanuki) is your Hagrid, but is more deus ex machina, in that if Mary is in trouble or needs help, he’s Johnny on the Spot with that solution. Then, he splits.

There is so much more that could have been done with this, as tons of tantalizing clues are strewn about, but left untouched. Why are there no personality stand-outs at the College? Everyone blends together into faceless, background entities. Why can’t Mary regulate her magical powers or figure out how to use them better? Why does the doctor have a Lego hand and a cybernetic brain? (I am sure this is related to the stunning open to the film, but it’s not really explained.)

When the thoughtless nature and vicious approach of the experiment is made clear, it kind of comes across as Nazi eugenics. Whoa! Isn’t that a bit heavy for a children’s film? Look, when we have time, I’ll explain why “Toy Story 3” is an allegory about the Jewish Holocaust of WWII. You’re never too young to learn. It’s just that this is how I saw it, in what those two were up to. We also have all of these diverse elements driving the tale but I sometimes felt I was waiting for the plot to show up to move it along to the next marker and the actual end of the film was never in doubt as to how it would turn out. In fact, it ended so abruptly, I got the feeling that they went as far as they felt they could and that all she wrote and the movie’s over.

Despite all my misgivings, I would still have you see it. Yes, it feels a bit slight, as there just wasn’t enough character development and you can’t live on action sequences alone (even though they look grand), but there is still a good tale to be told and I do not think you would get bored of it. It’s just that it is going to be a limited release, with no apparent plans for a wider distribution, so your chances to see it might be tough and you may have to await a later-this-year Blu-Ray release. Like the Fly-By-Night, it is out there, but you are going to have to actively hunt it down.

And remember, it’s first run until you’ve seen it. Be good to your broom!

It took me about 40 years and seven valiant attempts to finally enjoy anime. Whether I grew into it or the stories got better, things have been percolating along since 2004.
View all posts by The Droid →
Tagged  Mary and the Witch’s Flower.
Bookmark the permalink.