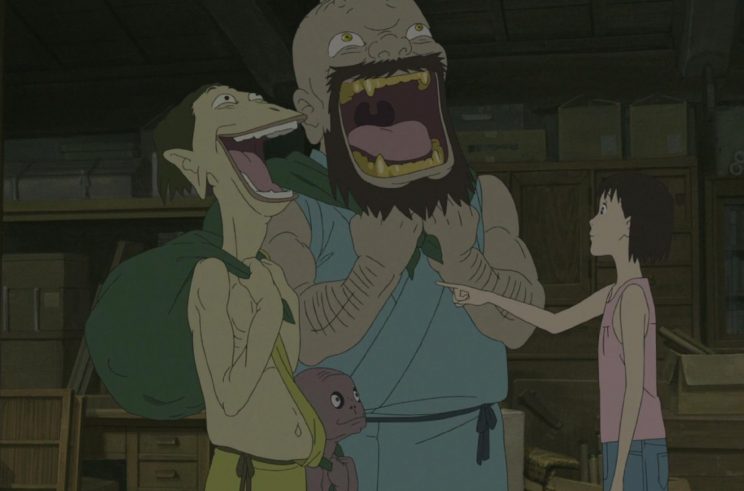 I don’t think my life is that big of a mess, but I constantly check what I have seen and what I have reviewed and when I find something that I haven’t reviewed, I wince, for I need to be doing a better job of this. Kind of like having GPS directing you to the Chipotle at the bottom of the Hudson River, it’s not all that helpful. Fortunately, I can recover and pass along to you an interesting movie, “Momo e no Tegami” (“A Letter to Momo”).

It is hard to tell when this takes place. Being rather fluid in a time nature, one could state it happens now, but where she has gone to may be a bit too rural to have flat-screen TVs and cell phones and video game systems. Still, following the death of her father Kazuo, Momo Miyaura (her to the right) and her mother, Ikuko, travel from Tokyo to the Seto Inland Sea (that’s in the southern area of Japan). Momo carries Kazuo’s unfinished letter, which contains only the words ‘Dear Momo’.

The two arrive at Ikuko’s estate in Shio Island and meet their relatives Sachio and Sae Sadahama as well as Koichi, a postman and an old friend of Ikuko. He had a crush on Ikuko when stamps were like 4 yen each. Momo is devastated by the recent turn of events in her life and misses Tokyo. With nothing to do, she prowls around the house to investigate things. In the attic, she opens a present containing a rare picture book about goblins and yokai, collected by Sachio’s father. Three droplets from the sky enter Ikuko’s estate and transform into yokai consisting of (left to right) Kawa, Mame, and Iwa, the group’s leader. The movie details how Momo deals with these yokai and trying to forge a new life for herself in a strange and different place.

There are problems with numbers. Whenever I see seven of anything, I either think of dwarves or deadly sins. When I get to three, it’s either the Marx Brothers or the Three Stooges and these three guys are kinda like the stooges, in that they cause trouble for the locals. You see, only Momo can see them, although everyone else feels the effects of what they do. They are kind enough to help Momo, but you shouldn’t really rely on them too greatly. They are in it for themselves, stealing fruit from anyone who grows them and that is everyone.

After one such incident, Momo learns that these yokai are being punished for breaking divine laws and they would have to do something noble in order to release themselves from this punishment. And there is no real desire to do so, as they have lost their way. Hmmmm……….I see a theme here.

On the surface, this is a pretty standard film, in that folks need to realize that what you have to do for others is more important than what you have to do for yourself. But we sometimes get hooked up in the mundane and what we want (and make sure you understand the difference between what you want and what you need). It takes a grand and catastrophic incident to get people on the same page and thinking the same way to make any genuine change.

Again, it’s not a bad film. It’s just I get a bit tired of the yokai being some kind of deformed or hideous creatures. I mean, when you sit down and talk to them (if you can FIND them to sit down and talk to them), they really aren’t that bad, for the most part (yes, I have seen some anime where the yokai are sometimes homicidal!), but when you have no direction home, mayhem and mischief are partners in crime. It is a marvelously rendered film, in that the backgrounds are rich and sumptuous and you can revel in the beauty of that which may normally seem common. And the climax is certainly one of the most ambitious that I have seen executed.

My only real beef with this is with me, in that it always seems to be some young girl, on the cusp of womanhood, trying to cope with a situation or circumstance that is hard to comprehend, as they just do not have the life experience to grasp the complexity and the nuance that it brings. I am sure they are out there, but it never seems to be a guy having this caliber of problem. I assume that women are more in tune with their feelings or express themselves somewhat better. It’s just my problem to deal with, and that may have colored my review of it. Still, go out and see it, but I would save it for a rainy day, when there is nothing else on but you want something worth seeing that is less about action and more about emotions.

And remember, it’s first run until you’ve seen it. Who are you guys?

It took me about 40 years and seven valiant attempts to finally enjoy anime. Whether I grew into it or the stories got better, things have been percolating along since 2004.
View all posts by The Droid →
Tagged  A Letter To Momo, Adventure, Dramedy, Supernatural.
Bookmark the permalink.