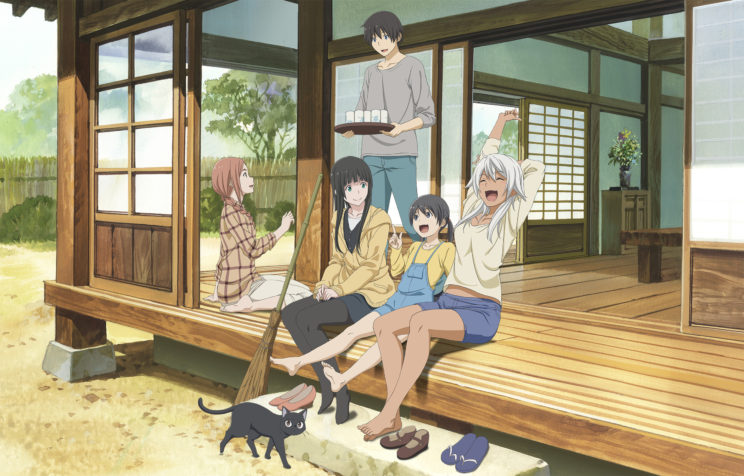 Another popular genre is the witch show. Sometimes, they come off as ‘magical girl’, but they still are putting out some degree of wizardry and prestidigitation. And we have to keep it on the QT, as we don’t want to spill the beans too soon. “Flying Witch” (“Furaingu Uitchi”) is about Makoto (that dark-haired beauty near the broom), a young witch from Yokohama, that moves to Aomori to live with some relatives as part of her training. What follows is Makoto’s daily life as she gets used to her new environment, her new relatives, and the new friends she makes there, as well as being introduced to the customs and peculiarities of witchcraft.

She brings her cat/familiar, Chito, (down in front) with her, but Makoto is more focused on making potions than in casting spells. It’s just that she is still a witch-in-training, so she is not all that good. Now, couple that with a wretched sense of direction for her and our rom-com is complete. And let’s talk about that host family, eh? Left to right:

Nao Ishiwatari, Kei’s friend and whose family runs a liquor store.
Kei Kuramoto, Makoto’s cousin. He doesn’t appear to have any abilities.
Chinatsu Kuramoto, Kei’s sister. Initially spooked off by witches, she has taken a shine to them.
Akane Kowata. Makoto’s older sister and a full-fledged witch.

The series shows her trying to balance the needs of the human world with her desire to grow as a witch. Along the way, we see a lot of odd characters from the witch-crafting world. None of them are dangerous or evil, but they sure do cast a long shadow on things, like the Harbinger of Spring or Inukai (we use her for comic relief). Makoto has a good heart, but just lacks the wherewithal to make things work like big sister Akane can. But Akane drinks way too much and is usually passed out on the veranda most of the time, so she is of little overall help.

The concern with this show is that there are not any real ‘problems’ to encounter. Anything that does come up can be easily rectified or taken care of. Perhaps the worst thing to happen to her is that her potions are not quite up to snuff (and thank goodness she’s not in Professor Snape’s class; he wouldn’t tolerate this nonsense!), but between her commitment to learn and the desire to be a complete witch, there are no problems that can go unresolved (except of Inukai, but that wasn’t her fault, anyway).

Despite all that I have said, I can’t really recommend the show. I feel bad about that. There isn’t anything ‘wrong’ with it, like thin characters or paste-on plots or transparent situations. But it lacks an edge. You don’t need an edge so sharp that it cuts off everything in your path, but there still needs to be a stronger degree of impetus to propel you to some degree of conclusion, even if it is a ‘coupler point’. I sometimes felt that I could lose an episode or two (with the exception of the Inukai placement) and not miss out on any great overall revelation. This might be more geared to someone younger or just starting out in anime viewing.

Do understand that I don’t need people being blown up or mowed down or chopped to pieces to enjoy an anime. That’s too much edge, but I need some kind of dynamic tension that keeps the protagonist focused on the goal. Eyes on the prize, folks.

So, we’ll split the difference. Watch the first two episodes. If you feel there is nothing for you, leave it; there will be nothing more for you. If there is a charm and grace that you like, watch the full run. And hang around for the second season.

And remember, it’s first run until you’ve seen it. Who is that person out there?

It took me about 40 years and seven valiant attempts to finally enjoy anime. Whether I grew into it or the stories got better, things have been percolating along since 2004.
View all posts by The Droid →
Tagged  comedy, Flying Witch, Magical, Supernatural.
Bookmark the permalink.