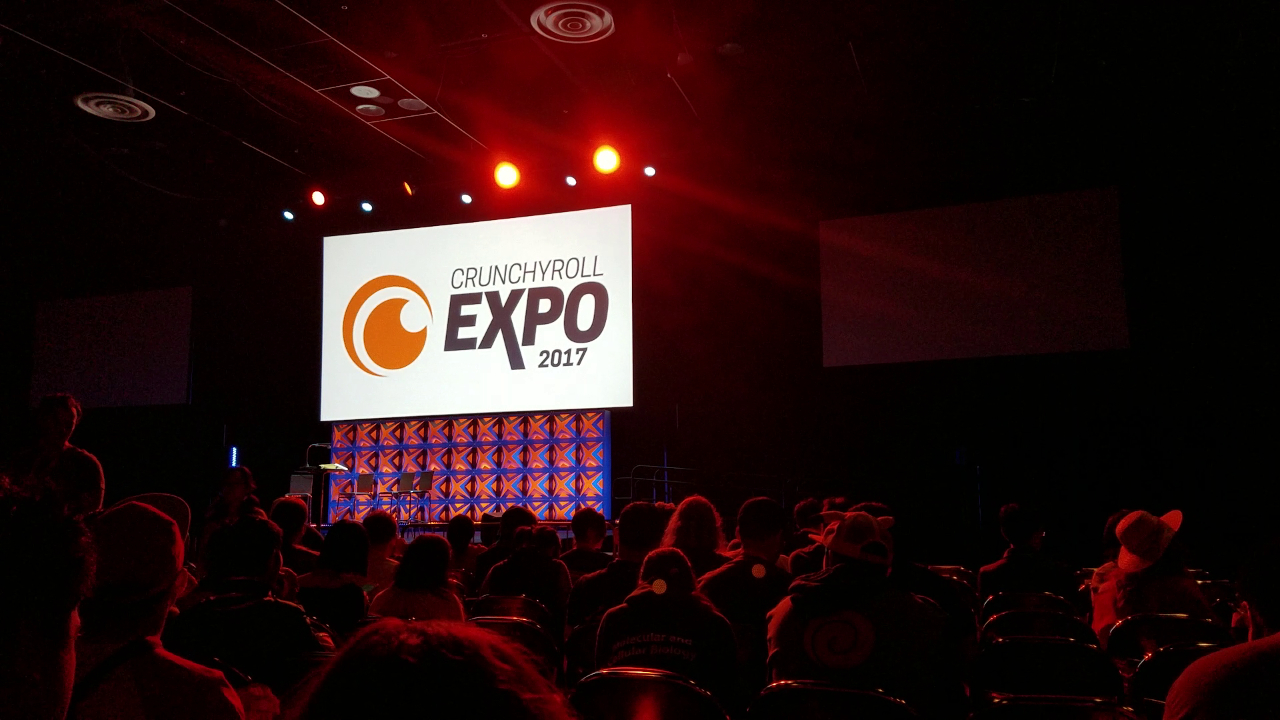 Crunchyroll had its first convention-style event last month (August 25th to August 27th) at the Santa Clara Convention Center in Santa Clara, California, and I had a fairly positive experience as a weekend attendee.

I tried to focus on topics I was deeply interested in so I could allow myself time to rest and walk around between panels/events. “Localizing: Anime, Games, Dramas, and More” covered the localization process with a focus on copyediting and quality assurance checking; there was a related panel that centered on translation later in the weekend. Amelia Cook and Lauren Orsini presented “A Feminist Survival Guide to Anime Fandom” with anecdotes from Anime Feminist‘s first year of existence and tips on engaging with critics and acting as an ally. “What’s Next for the Anime Industry?” featured Miles Thomas (speaking in a non-Crunchyroll capacity), Roland Kelts (columnist for The Japan Times and Japanamerica author), and Zac Bertschy (Anime News Network) discussing the possible futures of anime co-productions, improvements to animator working conditions, and other questions posed by Callum May of the Canipa Effect. The only discussion panel that I wanted to attend but couldn’t due to audience overcapacity was “Food in Anime”, hosted by Emily Bushman; Emily writes a Cooking with Anime column for Crunchyroll.

I went to a couple of events featuring Japanese guests, too. Japanese animator Hiroshi Shimizu drew quick sketches to illustrate explanations of frame blocking and character design in his “Master Class” panel. Kore Yamazaki worked on inking an upcoming chapter of her manga The Ancient Magus’ Bride while she was on the Main Stage with her magazine editor and answering questions from a moderator. 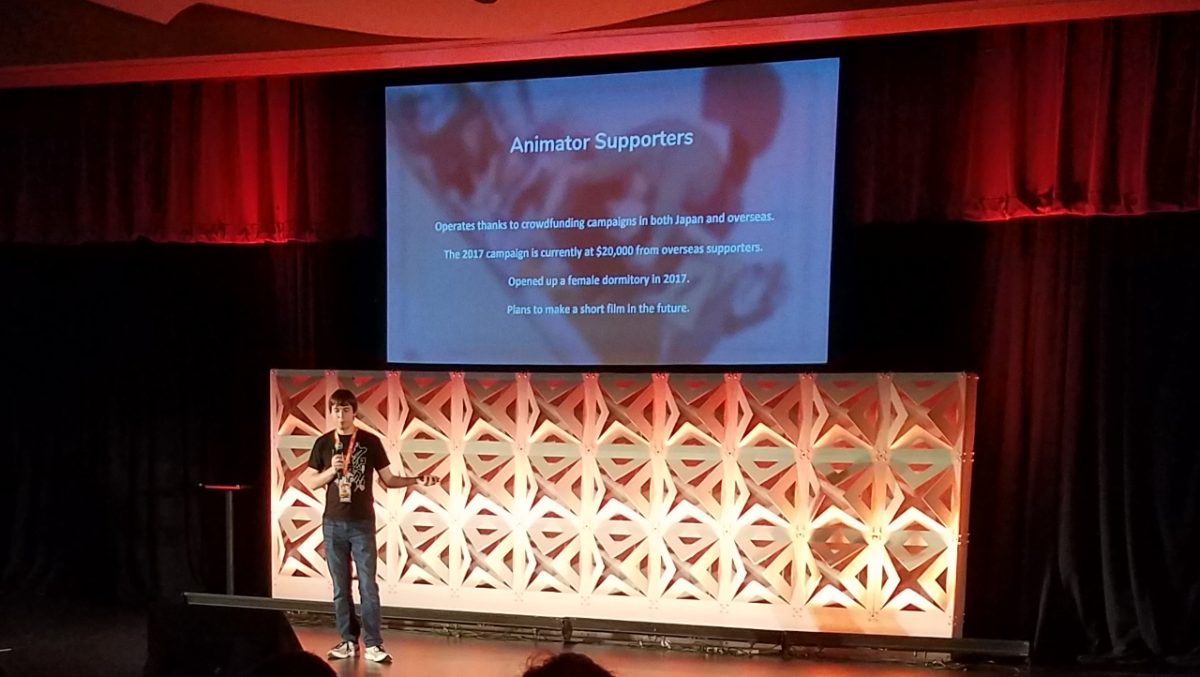 Callum May presenting details about the Animator Supporters project

The 15-minute CRX Chats were a refreshing addition to the overall schedule. I saw four presentations in succession on Friday night: Callum shed some light on the Animator Supporters dormitory project; Glenn Kardy of Manga University talked about animal rescues in Japan and his company’s book, Edo Cats – Tails of Old Tokyo; Crunchyroll’s Miles Thomas described different ways monetization can affect anime production; and Lauren Orsini provided advice for budding otaku journalists. Later in the weekend, I watched Dallas Middaugh talk about the history of manga and its divergence from comics during the 20th century and Nate Ming present “Action as Storytelling”.

My convention-closing event was a screening of the first three episodes of The Ancient Magus’ Bride television series on Sunday afternoon. (Anime Expo had a world premiere screening in July; here is a recently released trailer for the TV series.) The episodes were shown back-to-back without opening or ending credit sequences, likely because Wit Studio will complete those closer to the series’ on-air premiere in October. The voice cast sounded spot-on and the manga’s opening chapters were adapted at a brisk pace with brief, humorous asides in some scenes. Kore Yamazaki and her editor took some questions from a moderator before the episodes were shown and audience questions after the last episode ended. I live-tweeted some of the audience questions and answers (thread 1, thread 2). 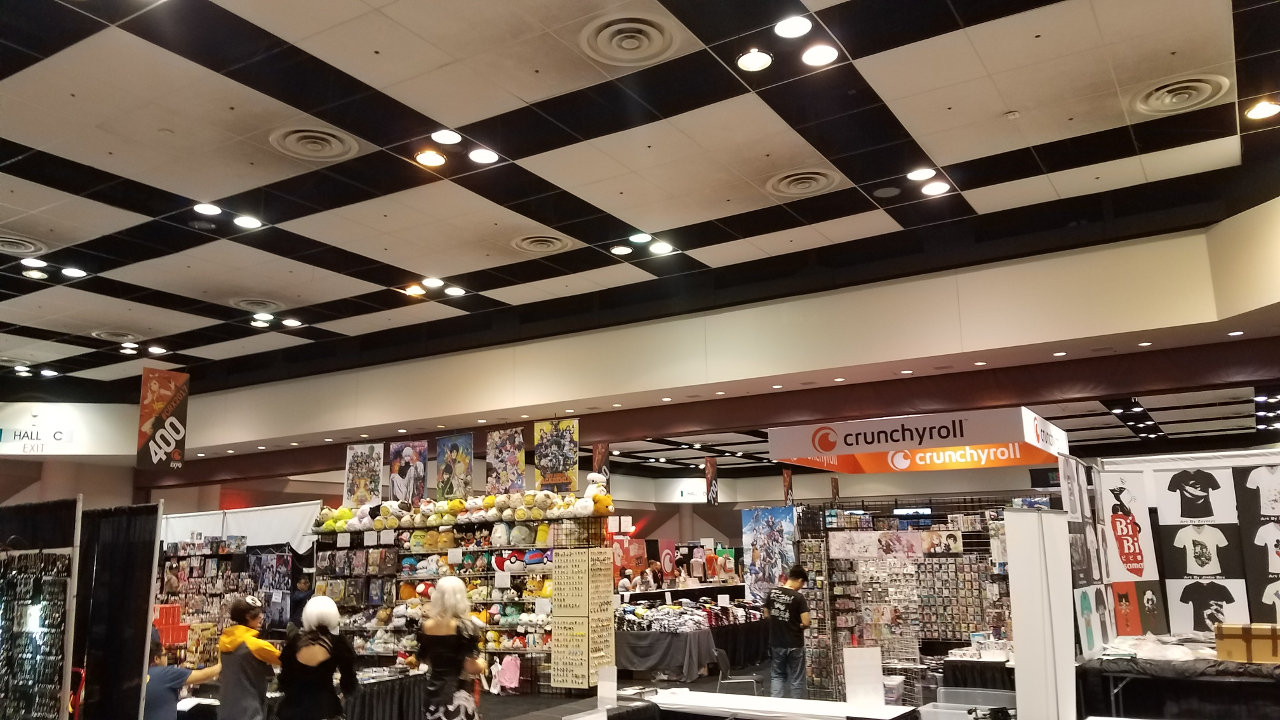 Crunchyroll Expo’s exhibit hall on Saturday before it officially opened

The Artist Alley and the exhibit hall were on opposite ends of the convention center — an arrangement that probably helped reduce general congestion in lobbies and corridors. On Saturday morning, I took an opportunity as a Premium Member to walk around the exhibit hall before it opened to the other attendees. It was interesting and a bit strange to witness vendors making fine touches to their booth displays. There was a Dragon Ball Super Puzzle Hunt event where visitors could walk to character standees in different parts of the hall and solve puzzles in order to obtain a “Goku Black Rose Crown” visor. I only completed one of the five puzzles but it seemed like a fun, casual activity for people browsing the hall throughout the weekend. Near the back of the hall was a DJ stage and a collection of heavily-decorated cars known as itasha. 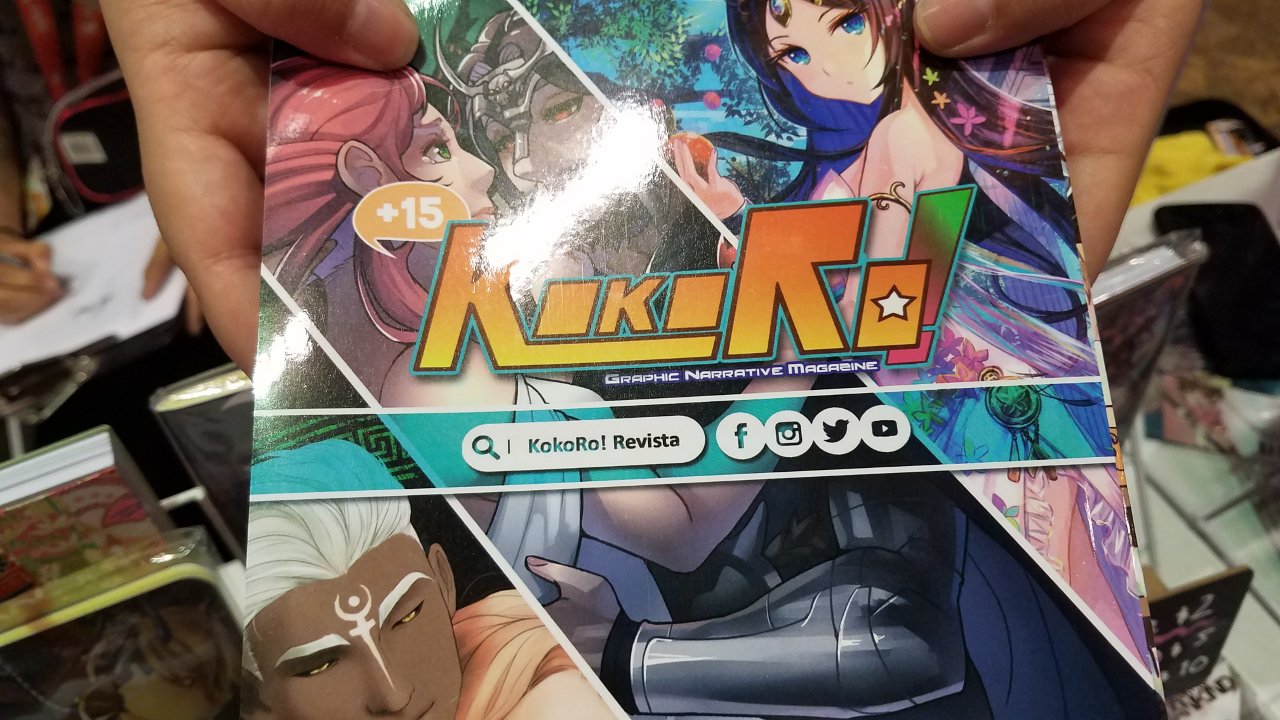 In Artist Alley, there were many booths with similar-looking airbrush prints but I did encounter some tables with eye-catching stuff. One table displayed an issue of Spanish-language magazine KokoRo!; I talked with a woman there and she said they hope to get English-translated issues distributed in the United States. Fracture Comics is a small comics publisher. Brian Wolf was showing off a tabletop card game called Tiny Swords. I bought a couple things while walking around: a sketch booklet from Erin Kipps and a mystery bag with stickers and buttons from Kayelynn Kennedy. 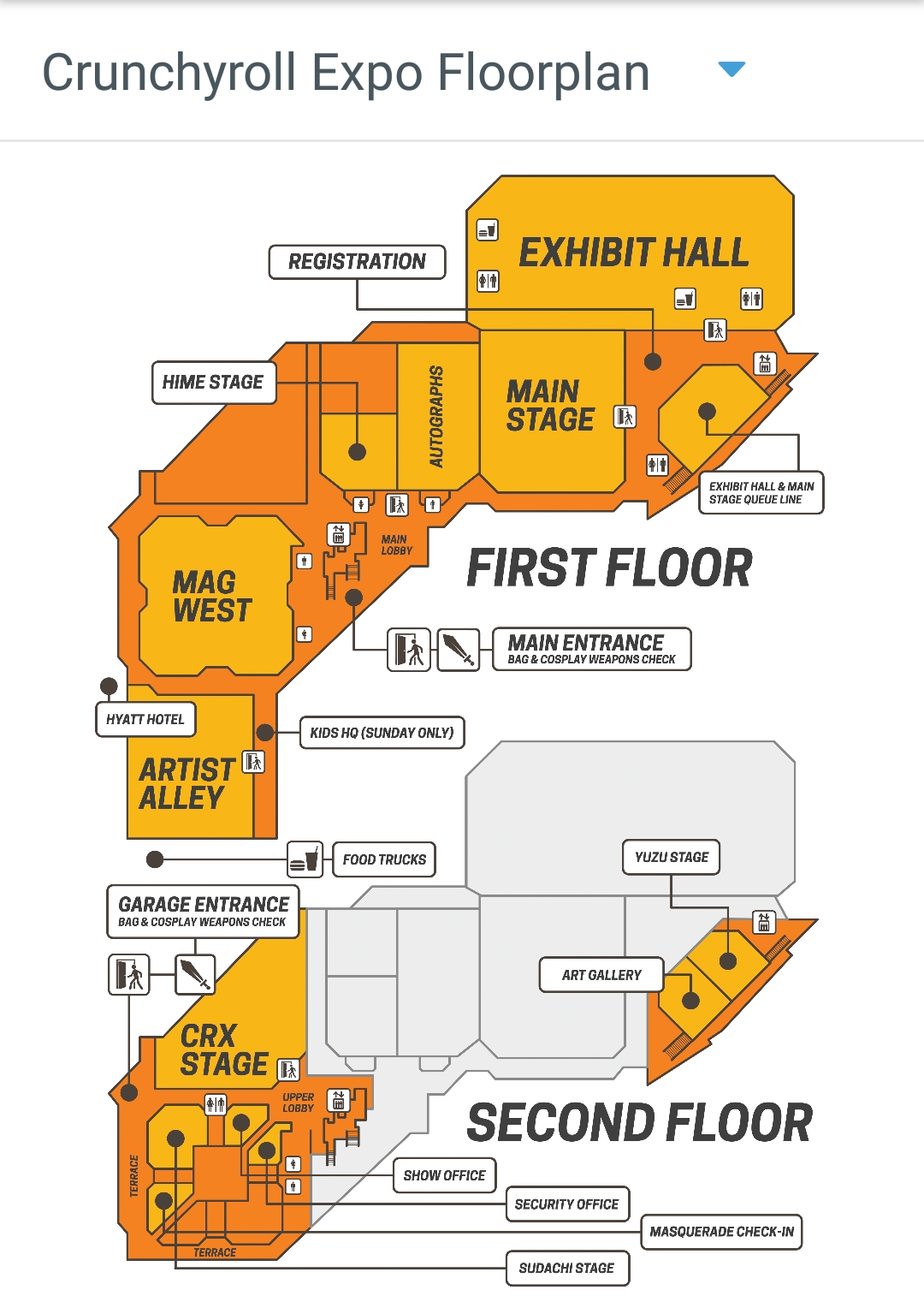 The layout of Crunchyroll Expo 2017, via the Guidebook app

Lines for the Main Stage events were managed in a queuing room just across the hallway from the Stage room’s entrance door and near the exhibit hall. I stood in that room ahead of the Ancient Magus’ Bride screening and the staff did a good job in managing cross-traffic by creating a pathway for about a minute at a time, allowing those in line to quickly stream into the seating area before resuming the flow of hallway movement.

MAGWest 2017 was happening at the same time as Crunchyroll Expo in the adjacent Hyatt Regency hotel and there were a couple MAGWest panels I would’ve liked to attend, such as a Q&A session with video game industry lawyers, a panel discussing experiences of women and LGBTQ+ creators in game development, and a presentation about digital orchestras in the Final Fantasy series. MAGWest and Crunchyroll Expo had sort of a crossover badge policy: Crunchyroll Expo attendees could go to MAGWest concerts while MAGWest attendees could visit Crunchryoll Expo’s exhibit hall from 2 PM to 7 PM on Friday & Saturday and from 2 PM to 4 PM on Sunday. If the two events coincide next year, I may look into getting a MAGWest badge.

I met a bunch of people in person for the first time (mostly Anitwitter folks) and also chatted with long-time friends. I attended an after-party on each night of the expo: one with mainly convention guests, industry folk, and their associates at a barcade on Friday and a Woke Weebs/Anime Feminist joint mixer at a Mexican restaurant’s bar section on Saturday. The interactions I had over the weekend boosted my motivation to try doing better at writing and reaching out to other people.

I have been blogging about anime for more than a decade. My other interests include sports, business & legal affairs, and philosophy.
View all posts by Tom →
Tagged  conventions, Crunchyroll Expo, Crunchyroll Expo 2017.
Bookmark the permalink.