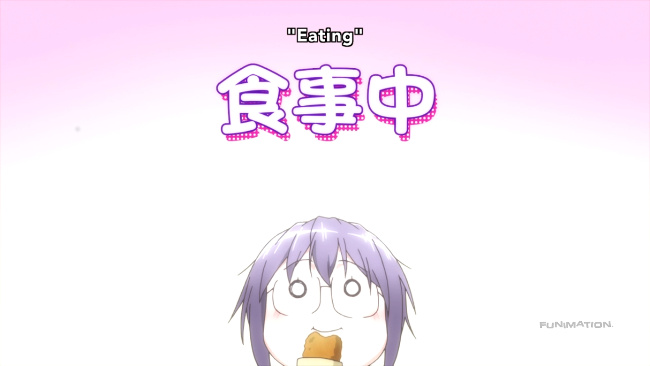 Disappearance of Nagato Yuki-chan: FUNimation announced this one as a spring simulcast but they hadn’t pinned down a schedule for releasing episodes so I ended up watching a fan-subtitled release on Sunday. Funi officially released episode 1 Monday afternoon and I re-watched the episode that way.

Spinoff Nagato was awkwardly and humorously shy, very unlike the composed and logical Nagato from the main Haruhi series. The interactions between Kyon and Spinoff Nagato were cute, too. I will continue watching it and I do plan to watch the official versions of future episodes when they get put up on a regular basis. 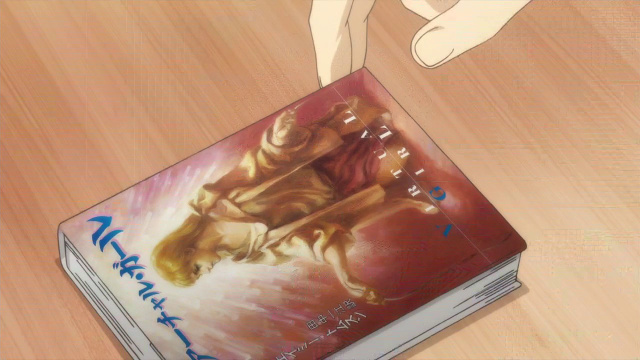 Food Wars! Shokugeki no Soma: I watched the first half of episode 1 on Friday and saw the rest on Monday. The second half had an overbearing, dramatic orchestral track and the fanservice-full food reactions were offputting. I had heard the manga got less like that after the first volume so maybe this adaptation will quickly shape up? I’m giving it one more episode and then I’ll decided whether or not to drop it. 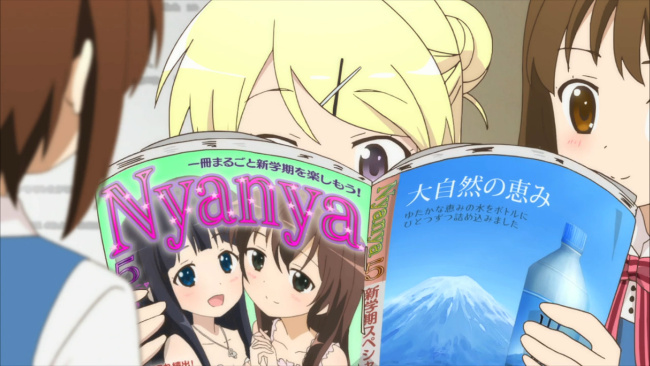 Hello!! Kiniro Mosaic: Aside from the addition of a new homeroom teacher, the same cast of characters from season 1 has returned. Season 2’s debut episode wasn’t laugh-out-loud funny out of the gate but Karen’s dialogue provided enough energy for me to get through it.

I Can’t Understand What My Husband Is Saying season 2: Before watching the new season’s first episode, I quickly finished the first season and was surprised at how contemplative the second half was. The show’s second season debut had some good humor in it and since it’s a short, I shouldn’t have trouble keeping up with it on a weekly basis.

Plastic Memories: Over the weekend, a bunch of people on my Twitter feed were watching and discussing the show’s debut – some loved it, some didn’t. I watched episode 1 last night and though I liked some of the basic sci-fi concepts within the show (such as androids with synthetic souls) and I certainly think there are themes that can prompt posts like ajthefourth’s personal one about family, I didn’t outright love it or get swept up in its emotional scenes. I want to see where it goes so I’ll give the second episode a shot and if that turns out to be an improvement on episode 1, I’ll stick with it further.

Show By Rock!!: Sanrio’s music mobile game adaptation had some funny moments and a 3D CG sequence that partly explained within the show. My favorite character so far is Plasmagica’s glasses-wearing bassist Retoree.

Teekyu 4 & Takamiya Nasuno Desu!: this quick-gags franchise continued its pace with season four’s premiere in the main series and branched out into more rich-girl humor with Takyamiya Nasuno’s show. Like with the otaku husband show, the episodes are short enough that I can keep up with them or quickly catch up if I do fall behind at some point.

Vampire Holmes: Terrible animation and barely funny jokes were factors in me dropping this three-minutes-an-episode show that’s currently not being simulcast in English-speaking territories.

I have been blogging about anime for more than a decade. My other interests include sports, business & legal affairs, and philosophy.
View all posts by Tom →
Tagged  Anime, Food Wars, Hello!! Kiniro Mosaic, I Can't Understand What My Husband is Saying, Plastic Memories, Shokugeki no Soma, Show By Rock!!, spring 2015, Takamiya Nasuno Desu!, Teekyu, The Disappearance of Nagato Yuki-chan, Vampire Holmes.
Bookmark the permalink.