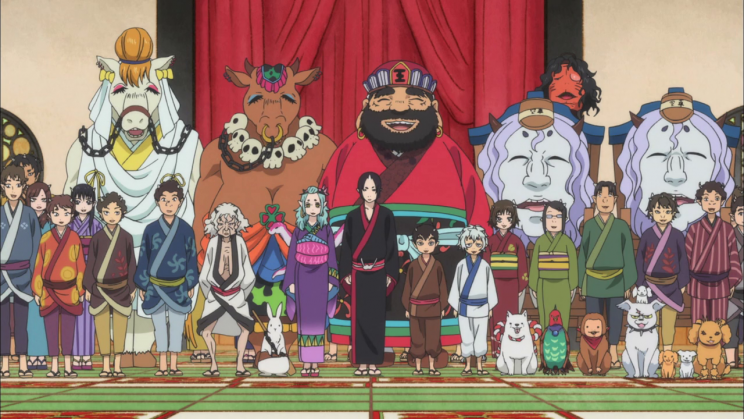 This was a show I really liked, as it was one of the few times that I could actually relate to the lead character. And he works in Hell. No, I mean he actually works in Hell. “Hōzuki no Reitetsu” (“Hozuki’s Coolheadedness”) tells the story of Hozuki (although I have seen it as Hoozuki; that is him front and center) who is a demon ogre (Psst! Don’t tell Shrek, OK?) working for King Enma (Mr Jolly behind him). Enma is the Judge of Hell and makes the decision which Hell you go to. Huh? That’s right; there are 256 divisions of Hell (depending on what you did during your life to have you directed down here) and he sends you to, say, Screaming Hell (that’s where all the drunks go). It is up to Hozuki to make sure things run well once you get there. Can’t have the employees slacking off or not really doing their job; then Hell would really go to hell.

Yes, Hell is a massive bureaucracy and things can easily go off the rails. And what about training the new crop of demons? And what happens when King Enma throws his back out? In an open sense of the word, this is an underworld version of “The Office”. Some of the best humor comes when Hozuki has dealings with Hakutaku. He is a doctor of some caliber (well, more of an herbalist; nope, he’s not up there) and a real ladies’ man.

Hozuki hates him and they have words and fights and other unpleasantness. Now, remember that Hozuki is a demon ogre. Although he never loses his temper, he is quite sadistic and enjoys employing violence to resolve issues, but it’s done more as a function of his job and not to torture or torment. You cross the line, you get hammered. It’s nothing personal; it’s all business. However, he loves animals and cultivates this bizarre plant called Goldfish Flowers. He has even been known to come to the Mortal World to visit our zoos.

It’s just that I really understand this character: the person who keeps this entire mess running and if it wasn’t for him, Hell falls apart. The characters are strange and odd enough as it is (like you are going to get ANY degree of normal in Hell. Let us NOT discuss that Granny demon, nor that combative bunny next to her). Yet you find yourself connecting with them in one form or another.

This is a marvelous-looking show, with all the backgrounds coming off like some Asian woodcuts. And when demons from other worlds come (Europe Devil shows up and is completely pole-axed as how things run around here), it feels more like some corporate meeting than anything else. I don’t know if you ‘learn’ anything about another culture’s approach to the afterlife; it felt like real life, having to deal with people you detest and a mind-bending pile of work you have to attend to that is not going to go away on its own accord. At least the food in the cafeteria is interesting. Broiled coelacanth?

The series has concluded, but there are three OVAs and it is best just to go straight through them. There is no real logical place to insert them, so take it like it is and enjoy additional mayhem.

And remember, it’s first run until you’ve seen it. I live to serve you…..kinda.

It took me about 40 years and seven valiant attempts to finally enjoy anime. Whether I grew into it or the stories got better, things have been percolating along since 2004.
View all posts by The Droid →
Tagged  comedy, Fantasy, Hozuki’s Coolheadedness, Slice of Life, Supernatural.
Bookmark the permalink.