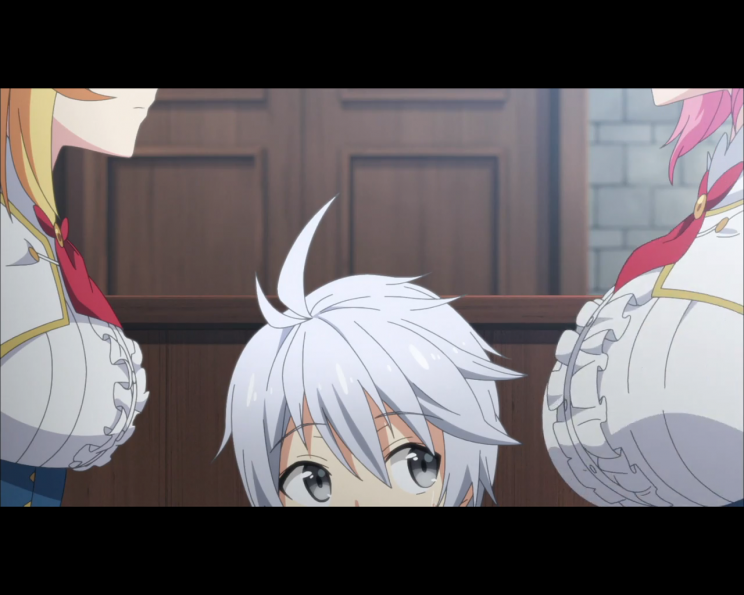 He was the seventh crown prince of the Arcadia Empire that was overthrown via a rebellion five years earlier. He is a new transfer to Royal Knight Academy, but in trying to help a girl, he accidentally trespasses into the female dormitory’s bathing area and sees the kingdom’s new princess, Lisesharte, naked, incurring her wrath. Lisesharte then challenged Lux to a Drag-Ride duel. No, I’m not talking about getting out your souped-up hot-rod and racing for pink slips.

Drag-Rides (machine dragon rides) are ancient armored mechanical weapons that have been excavated from Ruins all around the world. Lux used to be called the strongest Drag-Knight, but now he’s known as the “undefeated weakest” Drag-Knight because he will absolutely not fail in battle. After his fight date with Lisesharte (that’s her on the left), Lux ends up attending the female-only academy that trains future Drag-Knights. You see, after the coup d’état, it appears all the MALE drag-riders either were killed off or went into exile, so he is a rare commodity, thus he is being asked into the Academy.

One of his remaining friends, Philuffy Aingram (right), is also at the Academy. Her family took in Lux and his sister Airi, so that is how they know each other. She also attends this academy, which may be the only place in town to get a quality education. The show profiles Lux’s life and his trying to fit back in to society, plus all the knee-slappin’ boob jokes that come along with an all-girls’ academy. We have a field trip to The Ruins, these odd, out of place ‘buildings’ (for lack of a better term) where Drag Rides seemingly come from and the need to understand what you can get out of them. Not everyone can ride one and, like wands, it chooses the rider, not the other way around.

It’s just that I am in the middle of a variety of shows about folks with talent going to an academy of sorts to learn about their powers and defend the weak from the obnoxiously strong. And since they more or less follow the same formula, it is hard to find any striking difference between the shows, until they all kind of blend together into a smoothie of sameness. In one sense, this show isn’t much different than “The Familiar of Zero” in that Lux is kind of like that level of person who is mistrusted. And since it skirts a mecha-style show, we have just a bit too many fights to see how these weapons really work.

The show had a good idea, but I have seen it done better elsewhere, so it ends up being a tepid serving of the same old things.

And remember, it’s first run until you’ve seen it. I challenge you to a Drag fight!

It took me about 40 years and seven valiant attempts to finally enjoy anime. Whether I grew into it or the stories got better, things have been percolating along since 2004.
View all posts by The Droid →
Tagged  Undefeated Bahamut Chronicle.
Bookmark the permalink.