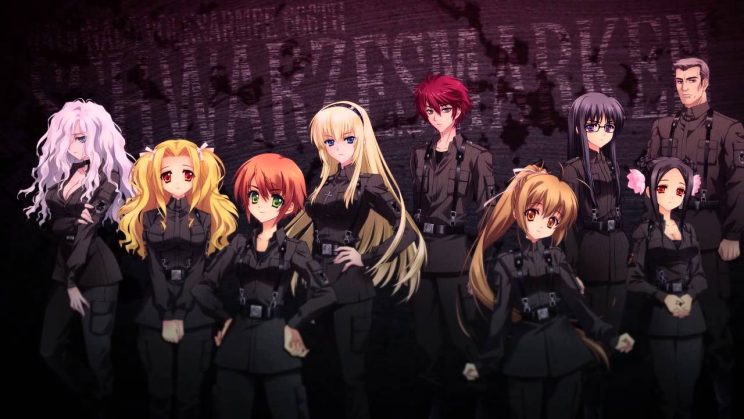 The human forces have come up with TSF Robots (Tactical Surface Fighters) that can do a fair job of getting the job done, but there is such an attrition cost (and these things take forever to build), that humans are at the disadvantage. Our story focuses on 1983 (“Do You Really Want to Hurt Me?”) and the East German Army 666th TSF Squadron. This is a group of total toughs. Their singular, primary job is to destroy the laser class BETA. Those guys shoot laser beams from their eyes, making aerial assaults useless. But once the lasers are gone, the rest of the force can be mopped up fairly easily.

The cast? It’s a huge one! Left to right, these are the members of the 666th:

Sylwia Krzasińska, a pilot from Poland and a bit aloof.
Inghild Bronikowski, a pilot and a friend of Anett.
Anett Hosenfeld, Second Lieutenant, harbors a grudge against Theodor.
Irisdina Bernhard, Captain, a real hard-nosed hard-liner.
Theodor Eberbach, Second Lieutenant and hates Irisdina.
Katia Waldheim, another Second Lieutenant, she came from the West to the East to unify the two countries.
Gretel Jeckeln, political officer for the group, she works on the morale
Pham Thi Lan, second-in-command, a pilot, but Irisdina’s lackey.
Walter Kruger, pilot and staff officer.

There are others as well, but we are focused on the 666th. This is a politically steeped show, as the squad wants to show the world that the East Germans can defeat these BETAs WITHOUT help from the rest of the world. However, with the threat of the STASI (their secret police) ever present, you could get sold down the river as easily as getting mowed down in battle. There is a massive season-ending arc, where NATO Forces join up with the East Germans and launch an enormous counter-offensive to try and break the BETA once and for all, but this ain’t D-Day.

At least one of the problems that I had with “Muv-Luv” is not here, in that the story stopped being about halting the BETA and became a show about a political uprising and internecine conflicts. This show is all that and a jar of Nutella, but it is done with the omnipresent threat of the BETA ready to kill you all, so you are fighting simultaneous wars on all fronts. It still has a hard time selling the political agenda portion of it, as it comes off that many of the soldiers are brainwashed or indoctrinated into thinking that their form of government is the best and everyone else are lying jackals. We have certainly left a huge amount of problems and hatreds and political turmoil and battlefield actions on the table that a second season is needed, but……….

If you saw “Muv-Luv”, you know how it turns out. If you haven’t seen it, I would suggest flipping the series and catch this one first, then barrel into “Muv-Luv”. It may make a better degree of sense owing to a stronger continuity of things, but you may end up feeling short-changed at the end.

And remember, it’s first run until you’ve seen it. We must show the West what we can do.

It took me about 40 years and seven valiant attempts to finally enjoy anime. Whether I grew into it or the stories got better, things have been percolating along since 2004.
View all posts by The Droid →
Tagged  Schwarzesmarken.
Bookmark the permalink.