A “Method” To the Madness 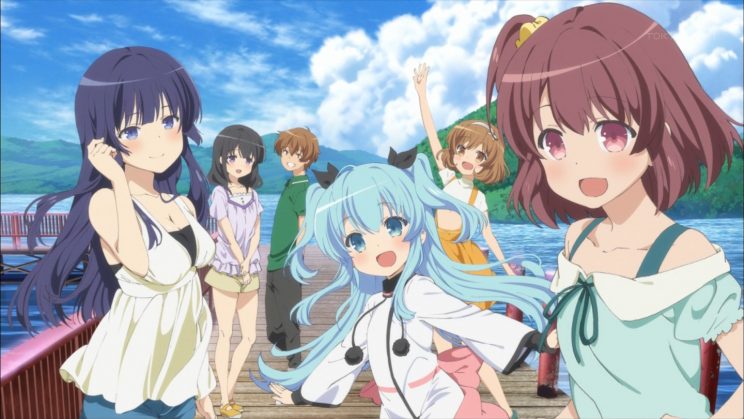 This was a show I started to watch, had it taken away and picked it back up to complete it when it returned. “Sora no Method” (“Celestial Method”) is kind of like what happened to me with this show, in that things we did in the past have now come around to greet us again and need to be completed.

Nonoka Komiya (far right) is a girl who once lived in Lake Kiriya City, but moved out. Seven years have passed and she returns to discover there is a mysterious blue saucer hovering over the city. This is a big tourist attraction, as no one can answer any questions about it. I mean, all it does is hover, but is otherwise completely inert to anything and everything. As Nonoka tries to make herself at home, so to speak, she meets this odd girl, Noel (blue hair in the center) who claims that she not only knows of her, but has been waiting all this time to grant her wish to her, a wish that was made seven years earlier.

There is an abandoned observatory on the edge of the lake, then as now, and Nonoka remembers what she did there with her friends one night, who are (left to right):

Shione Togawa (she normally wears headphones and is very distant towards people)
Koharu Shiihara (a bit of an airhead, she works out of the gift shop devoted to the saucer)
Sōta Mizusaka (twin brother of Yuzuki, he has feelings for Koharu)
Yuzuki Mizusaka (energetic, she spends her time protesting against the saucer)

The show is about all of them getting back together and trying to work through the hurtful feelings and, dare I say it, traitorous emotions as to what happened seven years ago. I’m not giving away too much by saying that Noel is an odd fish. Who is she really? (You’ll find out). It’s just that it is a really slow-moving show. Not necessarily turgid, but it seems to be like pulling teeth to get these people to open up and explain why they feel how they feel. I also want to give a warning that there is a dramatic mid-course correction at Episode 12. Things get explained over the last two episodes, but stick with it. No, you did not miss any but you have to pay especially close attention to Episode 11.

Despite the ending, I honestly feel the show has reached a conclusion. At this point, it would just be all their lives together, and that is not what the story beforehand was about. Although it is not a bad series, it sometimes veered into Angry Girl Territory. Folks were angry and upset and you should know WHY I am angry and upset and if I have to explain it to you as to why I am angry and upset, then you will never understand how angry and upset I am with you. This gets frustrating, especially since I honestly don’t know why any of them truly felt that way.

It just comes off as a slight show. It’s not sci-fi enough to be called really science fiction, it’s not dramatic enough to be fully drama and it’s almost too sparkly to be taken fully seriously. This might be a good starter anime for trying to get someone interested in it, as there is just enough going on with the story to keep folks involved, but nothing that might scare them away. For more seasoned watchers, it’s just too slight to warrant anything more.

And remember, it’s first run until you’ve seen it. Just say ‘no’ to the saucer.

It took me about 40 years and seven valiant attempts to finally enjoy anime. Whether I grew into it or the stories got better, things have been percolating along since 2004.
View all posts by The Droid →
Tagged  Celestial Method, Drama, Science fiction, Slice of Life, Sora no Method.
Bookmark the permalink.