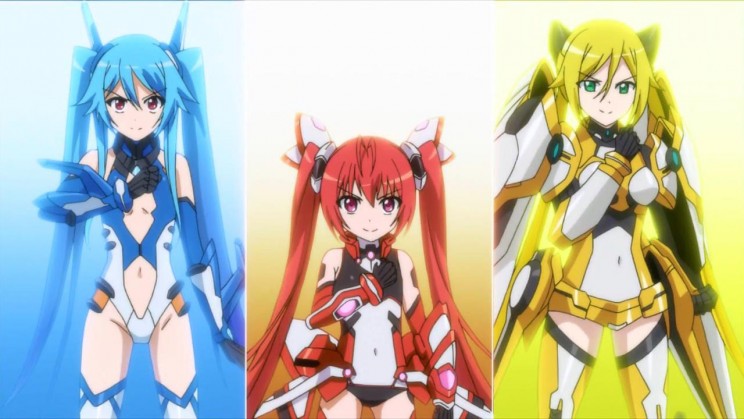 Although this is kind of a ‘Girls Who Save the World’ caliber of show, it was very hard to take this seriously, even when it became ‘serious’. “Gonna be the Twin-Tail!!” (“Ore, Tsuintēru ni Narimasu”, “I Will Become a Twintail”.) also takes gender-bending to another level.

We are at Yōgetsu Private Academy. Sōji Mitsuka is an ordinary high school boy who has an obsession for twintails hair. That is when you split the hair, so you have it flaring off to the side, as we see up there, although it can trail in the back as well. At the opening ceremony, he is enraptured with the numerous twintails about him, especially Erina Shindō, who is the student body president and has a magnificent pair…of twintails.

One day, he encounters a mysterious girl named Twoearle who is from a parallel world. It seems that monsters have appeared in this town and declare that all twintails in the world belong to them. These monsters feed off the “attribute power”, the spiritual energy of humans. Twoearle entrusts Sōji with Tail Gear, transforming armor initiated by powerful twintails attributes. With the armor, Sōji turns into Tail Red, a twintails warrior to protect Earth. That’s right, our boy student has to transform into the girl hero you see in the middle. It appears that his love for twintails is so powerful, that these other monsters are no match for him…her…whatever.

Well, you can’t fight alone, so he gets two other helpers. To the left is Aika Tsube, a childhood friend of Soji. Whereas the world embraces Tail Red, as Tail Blue, she is seen as scary and a potential threat to Tail Red, so she has a lot of PR work to do. When they need a real backup, they turn to…. Erina Shindō! She always wanted to be a hero and as Tail Yellow, she can do that and more. And when I mean ‘more’, you can see her results.

When Soji transforms, not only does he shift gender, but he loses at least a foot in height. When Erina shift, she gets taller and a bit more fulsome. When Tsube changes, well, it just emphasizes her small bust. She just can’t catch a break. Now to the enemies.

These bad guys are really bad. And bad in the sense that they are weak and terrible, not all that ‘evil’. They are called Ultimegil, and represent a variety of phantom-monsters that traverse different worlds, seeking a variety of “attributes”. Having discovered Earth is rich in attributes, they began to colonize and make plans to conquer the Earth. Members all have the term ‘gildy’ in their name (Tigergildy or Sparrowgildy) and all are really perverts like: having a ribbon fetish or a lip fetish or a girl holding a doll fetish. Needless to say, they are dispatched right and left, so they have to call in Anko Isuna, AKA Dark Grasper, who can potentially defeat them all and she is a human, so she has much greater powers.

It’s just that you never felt there was a huge concern with what was going on and that the world’s attributes would all disappear. It is truly a silly show and I felt it was done more to showcase the silliness with things, but sometimes you can be too silly and your show falls apart, as there is no cohesion with the plot and the characters. The villains could have been a smudge meaner and not the caliber of Batman TV show villains or you play it up harder and campier than they did. And we are not going to discuss the armor outfits in general. They just come off as odd. Although the season has ended, there are always new monsters and foes out there, so it could move on to bigger and more complicated issues. Or not.

And remember, it’s first run until you’ve seen it. It’s a twintails world.

It took me about 40 years and seven valiant attempts to finally enjoy anime. Whether I grew into it or the stories got better, things have been percolating along since 2004.
View all posts by The Droid →
Tagged  comedy, Fantasy, gender-bender, Gonna be the Twin-Tail!!.
Bookmark the permalink.