I Have “Erased” That Line 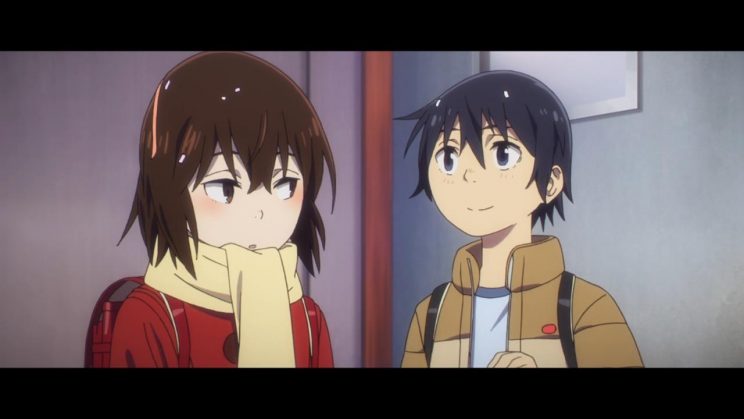 Every year, one show comes out that is completely head and shoulders above the rest of the offerings. The only thing wrong with “Boku Dake ga Inai Machi”, (“The Town Where Only I am Missing”, also known as “Erased”) is the capsule description that came with it (“Satoru Fujinuma is a struggling manga artist who has the ability to turn back time and prevent deaths.”) A show lives or dies by the capsule and this one sank it low on my ‘must see’ list. Thank goodness that it was next in line when a slack period came around or I may have missed out on something tremendous.

Satoru Fujinuma, (that’s him, when he was younger) as mentioned, is a man who possesses an ability (he calls it Revival) that sends him back in time, kind of like a short rewind, moments before a life-threatening incident happens, allowing him to prevent it from occurring and, thusly, change the timeline. The only trick is that he has to be hyper aware as to what it is or might be, as he may have only one chance to correct it. The last time this happened, he prevented a truck driver from having a serious accident that could have killed many, but it put Satoru in the hospital. While there, his mother comes down to help with things.

Out one day, being together, Satoru has a rewind, but cannot determine what it was he had to do. Even Mom, who has known of this talent, is at a loss as to what to see. SPOILER NOTICE: later that night, his mother is murdered by an unknown assailant and Satoru’s ability suddenly sends him back about eighteen years to when he was still in elementary school, giving him the opportunity to prevent a kidnapping incident that took the lives of three of his classmates.

Now, what makes this great is that he retains all of his memories of that time and what he has learned since. Even he finds it creepy that he is a 29-year-old man in a 10-year-old body. But this time, this time he is not going to make the same mistakes that caused the deaths of classmates, starting with Kayo Hinazuki (Madam Leery up there). She was a bit of a loner and was a child abuse victim. It seems everyone knew of it, but back in 1988 (when this all went down), everyone turned a blind eye to things and allowed it to occur.

But you have to be careful when playing with the past, as you alter the future. Aside from this being a real cat-and-mouse game, the stakes are life-and-death as he has to save four lives. And since this takes place during the winter, you get the double chills from the weather and how the events play out. Yes, the winter setting also plays into a lot of what happens.

The conclusion was a bit sappy, but I’ll let it slide. I do not think you will see a better anime this year and you will certainly not see a better thriller for some time to come. Since the series has concluded, this would easily stand up to a binge watch and I would suggest doing so, or at least a six-and-six approach. The actual end is nice, but this show is done. There will not be a second season (and watch me get proven wrong; I guessed wrong about “Code Geass”).

And remember, it’s first run until you’ve seen it. I cannot fail.

It took me about 40 years and seven valiant attempts to finally enjoy anime. Whether I grew into it or the stories got better, things have been percolating along since 2004.
View all posts by The Droid →
Tagged  Boku dake ga Inai Machi, Crime drama, Erased, mystery, time-travel.
Bookmark the permalink.