That’s “Mister” To You 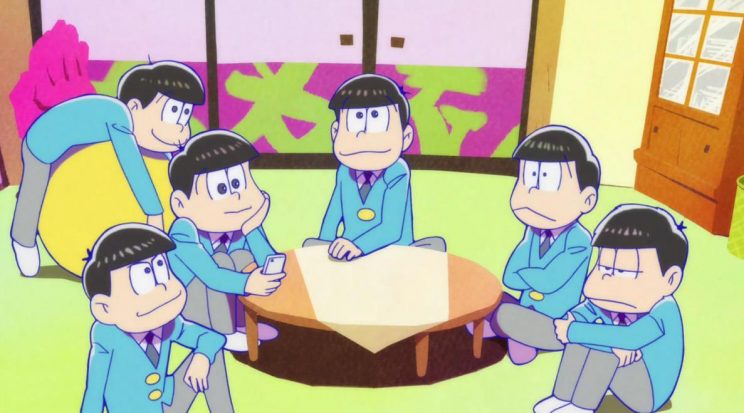 “Osomatsu-san” (“Mr. Osomatsu”) is a throwback show, something I have not readily encountered. The show originally ran from 1966 to 1967, in what would have constituted the First Wave of anime (and could have been shown on US television, when I had my initial encounter with anime back in 1964). It was everything you might recall from that time: flat or non-existent backgrounds, overly–broad characters, simple art design and pointless plots.

For this reboot, they embrace the modernity of current anime, but retain some elements of the original show. In that show, they were 10-year-old sextuplets; now, they are twenty-something NEETs who can barely hold a job (and for the most part, when they do get a job, they don’t hold it for long). They are all different in character, but rarely in dress. Can I make the difference in this photo of the Matsunos? Left to right, from the ball:

They also have some rather bizarre stock characters helping them along: Chibita, who runs an oden stand; Iyami, who has massive buck teeth; Dekapan, who runs around in boxer shorts; Dayōn, who has an enormously wide mouth; and Hatabo, who comes off as a moron with a Japanese flag in his head. Now, I assume that in its day, it was a huge show and if they brought it over intact, it would have flopped, but this is where they did a change-up. They are not afraid to make fun of themselves. In the opening episode, they upgrade it all, so not only does it look modern and hip, the brothers look like some boyband, with those smoldering good looks. Then we get down to the stories.

It is still that typical 60s sitcom approach, in that there is a minor problem that gets blown out of proportion, and things are resolved by episode’s end, but no actual progress in their lives is made. They STILL don’t have a job and if one of them gets a job, the others sabotage it. However, there are some genuinely heartbreaking segments, like the front end of Episode 13 and the back end of Episode 15 (the episodes can be one long story or three mini-segments).

Another thing they do is “Girlymatsu”, which are female versions of themselves who are just as clueless as their male counterparts, except they are more pronounced in their character and personality. This allows for an alternate take on events and actions, like a difference between a boys’ night out and a girls’ night out. The only episode that is a total bust is Episode 12, which is a kind of recap show, completely reusing the footage from Episode 11 as the voice actors comment about the show up to that point. I’ve heard better commentary tracks for other shows in regards to this and it is the only genuine disappointment for this showcase.

I actually enjoyed this series. The quirky approach, the rude nature (there are a lot of pixelated moments, so you don’t see any naughty bits), their efforts to work very hard at not having to work hard, and the deliberate flat nature of the animation makes for a wonderful time. I also know that this show is not for everyone and certainly some of the characters are really out of step with our modern sensibilities, but in this world, they are needed. The artwork is also required to be this drab, as when we see these guys as ‘normal’ (which they do a few times), they really can’t be as such in a current anime. We need this gross caricature and overstated nonsense.

I would recommend seeing three episodes, as the first one is a real jabberwocky and not completely representative of the show overall, except in the spirit of what it hopes to accomplish.

And remember, it’s first run until you’ve seen it. Sheesh!

It took me about 40 years and seven valiant attempts to finally enjoy anime. Whether I grew into it or the stories got better, things have been percolating along since 2004.
View all posts by The Droid →
Tagged  comedy, Mr. Osomatsu, Osomatsu-san.
Bookmark the permalink.