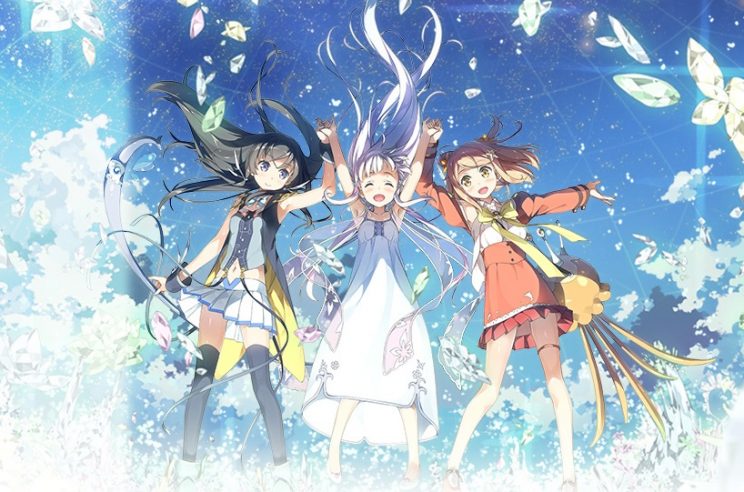 This is one really strange movie, in that you are uncertain what the reality is and what it all means, starting with the title. As I have said, if you can’t decide on a title, there are bigger problems afoot. “Garakowa: Restore the World”, (also known as “Vitreous Flower & Destroy the World”, “Garasu no Hana to Kowasu Sekai” or “The Glass Flower and The Destroyed World”) plunks you right into the thick of things, with nary a map or guidelines as to what is reality or what reality is. Forget Google Maps, or you’ll be trying to find that Chipotle in the middle of the Hudson River.

Dual (left) and Dorothy (right) are two programs who reside within the Box of Wisdom. Their job is to enter the various worlds, containing the memories of people across many timelines and deleting worlds that become infected with viruses. They spend a lot of time talking a caliber of philosophy and what they do, as we see them killing off a virus or two.

One day, they come across Remo (middle), a girl who has lost memory of who she is, who is searching for something known as the flower. While trying to figure out who she is, Dual and Dorothy spend time with Remo, learning to find joy in various things that they’d normally deem pointless. But then, Remo’s true nature is revealed to them and the girls have now come to a crossroads.  What has to happen next? Can they do what needs to be done?

Visually, this is a stupendous-looking offering. The backgrounds and the color palette used to present everything to us is one of the best I have seen. How they unspool the story for us is equally grand. But………..

At the remains of the day, it ends up being hollow at its core. We proposed to explore that which makes up humanity; all those complex elements that cannot be codified or compartmentalized but have to be experienced to be fully grasped. However, it comes off as half-hearted, as though a decision was made not to examine too deeply or ask those questions that should be asked, but we don’t do that in proper company. This is a shame. Perhaps it is a caliber of pilot to see if they want to make a full series, but I fear it is a one-shot and that is that. No Episode #0 for this one. And at 67 minutes, it is barely a movie, more like a 3-episode OVA. (Walt Disney’s “Dumbo” is a movie, and that comes in at 64 minutes).

This had a lot going for it, especially a willingness to push beyond the boundaries, not only as to what defines us as people, but as to what one can really do with anime. It’s more than just bodacious boobs or unrelenting violence, but a truly meaningful story to tell. Maybe they got cold feet at the last moment and decided to retrench. Perhaps their reach exceeded their grasp. Perhaps the world will never know.

And remember, it’s first run until you’ve seen it. I can’t do it.

It took me about 40 years and seven valiant attempts to finally enjoy anime. Whether I grew into it or the stories got better, things have been percolating along since 2004.
View all posts by The Droid →
Tagged  Garakowa: Restore the World.
Bookmark the permalink.