That Obscure “Object” of Desire 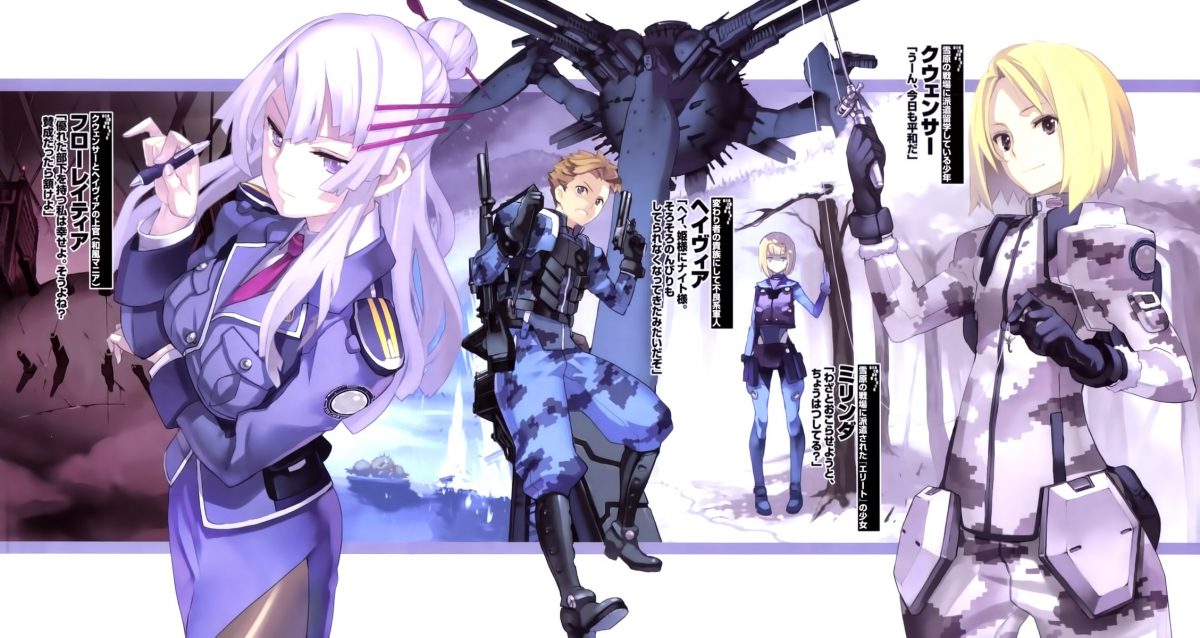 Because of this ‘disturbance in the Force’, all of the nations of the world have fractured into four coalitions which constantly wage war on each other: the “Legitimate Kingdom”, focused on tradition; the “Capitalist Enterprise” (for the manga, the “Capitalist Corporation”), which values profit; the “Information Union” (for the manga, the “Intelligence Alliance”), focused on knowledge; and the “Faith Organization”, which values religion above everything else. In a sense, this brave new world is like “1984” with the constant battles and no one is really an ally.

Well, with so much time and resources and money and effort poured into this machinery, the perception is that only Objects can destroy Objects. Thus, modern warfare is reduced to duels between Objects, resulting in shorter, cleaner, and safer wars. (Uh, no on all counts, but that’s something nice you tell yourself to get to sleep at night.) However, but, to wit and yet, when two regular soldiers from the Legitimate Kingdom, Havia Winchell (center) and Qwenthur Barbotage (right), use their smarts and ingenuity to destroy the “Water Strider” Object of the Faith Organization all by themselves, NOW things get all interesting. Having proven that Objects created by man can also be destroyed by man, Havia and Qwenthur are thrown into a new world of harrowing adventures and dangerous suicide missions. They also back up Baby Magnum, the Heavy Object their country has (oh, we have sided with the Legitimate Kingdom), piloted by Milinda Brantini (that young missy in the back between our heroes) and led by their commander Frolaytia Capistrano (left; you can’t see it here too well, but she has a pair of heavy objects herself).

So, instead of having these toe-to-toe battles (and you do get them; why spend all this money for a rather expensive paperweight if they aren’t going to go into battle), we get the sapper sabotage, under the cover of night approach. Now, these guys know their stuff and I have to think they succeed because most folks haven’t tumbled to the fact that two guys in really stupid uniforms can take out a 500,000 ton device (that one shows up later). Oh, the uniforms.

You can’t see them too well, but they make everyone look like ‘Rock-‘Em, Sock-‘Em Robots’. No form, limited functions. Even Richard Nixon’s White House Guard uniforms were more dignified. Still, you can’t sell short what these guys do to complete the missions. The only thing worse than battling the enemy is battling the bureaucracy from their own commanders, who also feel that two guys and 60 pounds of C-4 are inadequate to take out a Mini Bonbel (or whatever silly names these machines have been dubbed).

The series is broken down into arcs, which is nice, as you get to see the entire story unfold over those three or four episodes, instead of trying to cram all they do into one segment. But the real star of the show is the relationship that our three soldiers have for one another. Milinda battles for time to allow Havia and Q do what they have to do, to get her out of her jam (her ship is First Gen and woefully inadequate against some of the Fourth Gens she encounters) and secure a victory for the….good guys? This is a real head scratcher, as I do not know which is the side of right. Perhaps we are actually backing a totalitarian regime and we don’t know it and they are waging war against a decent people.

The end of the series is not the end of the show. There is a potentiality that they may decide to destroy all Heavy Objects of their enemies (it’s like an aircraft carrier; it takes a few years to construct) and lead the world to peace…..or greater war. Such is the future.

And remember, it’s first run until you’ve seen it. Who needs flesh-and-blood soldiers?

It took me about 40 years and seven valiant attempts to finally enjoy anime. Whether I grew into it or the stories got better, things have been percolating along since 2004.
View all posts by The Droid →
Tagged  Adventure, Fantasy, Heavy Object, War.
Bookmark the permalink.