Where is Your “Humanity”? 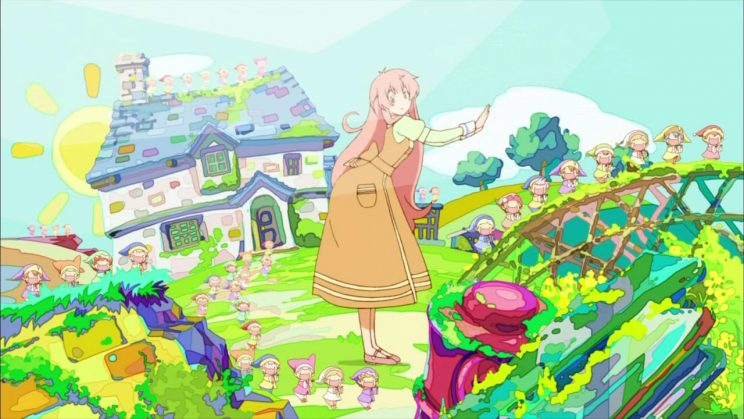 I initially resisted this show, as I was watching “Sunday Without God” at the same time it originally came out and did not feel like diving into another dystopian, post-apocalyptic world show. Well, it IS a caliber of dystopian, post-apocalyptic world show, but it’s just so bright and lively, it’s hard to believe we’re all doomed. “Humanity Has Declined” (“Jinrui wa Suitai Shimashita” or “Jintai”) starts off with how human civilization has regressed and humanity keeps decreasing in numbers. The story follows an unnamed girl (although she is referred to as “Ms. Sweets”) who acts as a mediator between humanity and the “fairies”, who are small elf-like creatures attracted by sweets and happy things, but also have the habit to cause trouble to her (and others) with their powers in their endless search for amusement.

So, let’s set the stage: there have been no births in a long time, so all the people we have are all the people we are going to have and Ms. Sweets could potentially be the last human to die (as she is rather young). Everything is in short supply, as whatever caused the decline in humanity may have also affected the ability to grow food or whatnot (that’s not really delved into). The fairies are not bad people, but lack the ability to grasp certain aspects. I got the feeling that they were immortal, so a lot of things they have either no interest in or no reason to fully understand. They do try to help the humans, but, as we know, the road to hell is paved with good intentions and it all goes south pretty quick.

The trip to the local food factory is rife with danger, as fairies have a disregard to human safety. Well, it’s not a willful disregard as much as it is an unawareness of things. The trip is both frightening and bizarrely hysterical (and if you think food factories are truly operated like this, you may be right) as all kinds of ‘secrets’ are revealed. Therein lays both the charm and the drawback of the show.

It is hard to determine when this takes place or how long the decline has been in effect, but despite all these books, people just do not seem to know anything about anything and the infrastructure has deteriorated to such an extent that electricity is seen as a major civilizational advancement. This would imply at least two generations removed from The Event that got us here.

Ms. Sweets is also overwhelmed by her task. The fairies are unrelentingly helpful and cheerful, but also completely clueless as to how things really work in this world. They want to help, but lack the means to pull it off successfully, so a task is done, but nowhere near where it has to be to be a genuine success. Episode Nine might be the Metaphorical Show, as it tells the tale of what happens when you are not smart about your resources. It gets a bit heavy-handed, but makes its point. The series concludes with a flashback, but doesn’t really bring the series to an end.

Although the overall topic is just as depressing as “Sunday”, it’s done with a great deal of zest and fervor. You actually don’t feel sad as to the shabby state humanity has found itself in, as there is still a brand of hope to turn it around and resuscitate it all. It’s not going to happen, but the optimism is apparent. This is truly an off-beat show and even with the frustrations that dog it, the charm and grace shine through.

And remember, it’s first run until you’ve seen it. Do you have any sweets?

It took me about 40 years and seven valiant attempts to finally enjoy anime. Whether I grew into it or the stories got better, things have been percolating along since 2004.
View all posts by The Droid →
Tagged  Humanity Has Declined.
Bookmark the permalink.