Baby, You Can “Drive” My Car 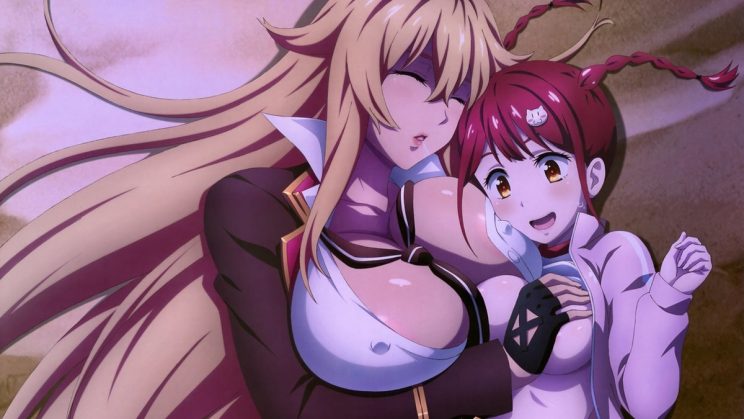 The world that they live in is fraught with peril. Some girls are infected with the A Virus (no, not ‘a’ virus, the A Virus.) “A” means “Armed” and some ladies can turn into weaponry. Those are known as Exters. The other part of the virus gives us a Liberator. When these two get together, via some foreplay arousal, the Exter goes into “Drive” and becomes the weapon, although you have no idea what she will be: a sword, a mace ball, a powerful rifle. It’s pot luck at best.

Mamori Tokonome (right) heard her parents talking about this virus at some point in the past, but didn’t understand what it was all about. Since Society considers these ladies a threat (ladies, always ladies, OK?), she was, well, kidnapped and dispatched to Mermaid Island, an artificial location where these ladies are warehoused. A very innocent and naïve 16-year-old, she is washed ashore on the island and tries to figure out what’s going on, only to run afoul of a dedicated Exter and Liberator couple, tanning on the beach in risqué outfits.

Tokonome is embarrassed and horrified when those two start passionately making out, with the groping and the sloppy kissing and the other bits of fondling to convert one of them into a weapon. Well, what can Tokonome do? Suddenly, another projectile arrives, this one bringing Mirei Shikishima, who is far more mature and aware as to what is going on. She and Tokonome smooch and French kiss and investigate the commodities until our young virgin turns into a massive sword and the other team is promptly dispatched.

Here’s one fun bit of trivia: Mirei is a YEAR YOUNGER than Mamori! And she looks like that? Honey, almost EVERYONE looks like that with their too-tight blouses and too-short skirts or other bizarre costuming (Lady Lady is a duo who can be BOTH Exter and Liberator and they both have a pair of gas tanks on them). They head over to the Main Castle, where Mamori is to be paired with another (who is NOT Mirei), but there is a rejection. Since these two are now considered ‘troublesome’, they go live with Torino Kazumi, an ample lady who tends to these lost waifs, who….who do what?

This show is similar to “Cross Ange”, in that women with powers and abilities are set aside from society, but here, they don’t do anything! They do not train; they do not protect; they do not seemingly learn what things are all about. They are, in the fullest terms, warehoused. Decent Society would not outright kill them, but they cannot remain with ‘normal’ people. So what happens to keep them from coming home and playing a rousing game of ‘Kick YOUR Can’?

If this wasn’t enough, there are enough secrets and secret secrets going on that the show gets undermined by its own problems. And the paste-on end crisis was terribly transparent. Now, I do not care to see naked boobies, but the censorship was so intrusive and annoying, it might have been better to let them fly free. In order to protect us from such salaciousness, the breasts turn into glowing orbs. Talk about headlights! And it appears that 90% of the ladies are jiggly jiggly. I assumed they did not wear bras as they did not come in those sizes. All in all, a very distracting show, as we only care about the boobs and the ‘activation’ sequence. Everything else gets in the way.

I have seen this caliber of fan service used ‘better’ (like in “Sekirei”), but with the physics of this world, it makes no sense. As an Exter, you are in a near-constant state of arousal all the time, as you can’t take out 20 minutes to convert when your opponent does it in two and they aren’t going to bestow any type of courtesy, as you are feeling off right now. I rated the fan service as high as I did because of intent. As mentioned, some of the ladies openly enjoy all of this attention they get to convert. Just imagine what it might have been like on an uncensored site. Well, maybe not.

And remember, it’s first run until you’ve seen it. Don’t call me a ‘virgin’.

It took me about 40 years and seven valiant attempts to finally enjoy anime. Whether I grew into it or the stories got better, things have been percolating along since 2004.
View all posts by The Droid →
Tagged  Action, Fan Service, Fantasy, Valkyrie Drive Mermaid.
Bookmark the permalink.