COMMENTARY – You “Drive” Me Crazy 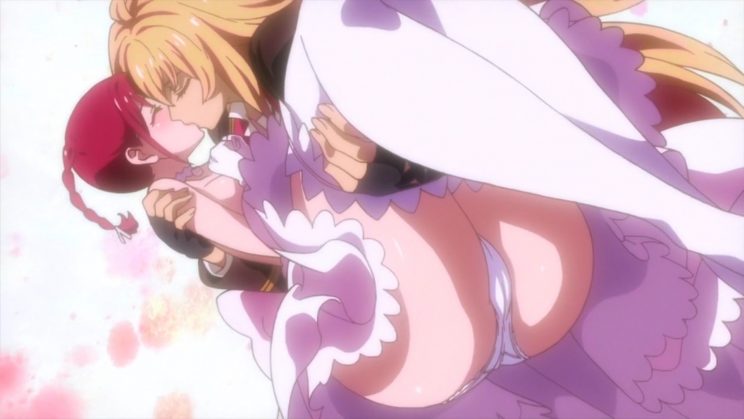 I have given a review of “Valkyrie Drive Mermaid”, a show that I could not fully like or embrace for a variety of reasons, but it allowed me to get into a discussion with my anime friends about what it is and isn’t. But first, a small side story:

The last time I went to AX, I attended a session regarding yaoi manga, as I felt I needed to know more about it. The person there referred to it as “Youth Activities On Ice”, so people could discuss it without causing confused looks from those who did not know what it was, especially parents. Do you really want to talk about your enjoyment of BL manga in front of Mom and Pop? Since there was no such acronym for yuri, I made one up: “Youth University Required Instruction”. The point is that potentially my definition of yuri is not what other people think of yuri and IS Valkyrie properly classified as ‘yuri’?

I bring this up, as I am looking at a show like “Maria Watches Over Us” or “Sweet Blue Flowers” or “Strawberry Panic!” to define what I consider to be classic yuri. Imagine my shock when I was told that “Hibike! Euphonium” and “Riddle Story of Devil” are considered yuri as well. For me, yuri is a story about a young girl, on the cusp of womanhood, who discovers that she has deep emotional feelings for another girl: a teacher, an upperclassman, a person in the same situation as her, and they explore these feelings and what they mean. It doesn’t have to delve into anything Sapphic or physical, but more as to what these feelings and emotions are and what they truly mean to and for each other. Two women together is not necessarily yuri. Or not. I don’t know anymore.

Yes, in “Valkyrie”, there is a tremendous amount of sloppy French kissing and groping and fondling and potentially some nipple rubbing, but this is a means to an end, not because I possess erotic desires for you. One friend stated, it is yuri, as there could have been some other means of activation, but since it has to be a very sexually explicit approach, whether or not the ladies in question like it or hate it (Mamoro intensely dislikes it, as this is not how ‘normal’ people act), the mere act of engaging in it pushes it to the realm of yuri. Or, as Tina Turner asked us “What’s Love Got to Do with It?”

I counter-argued that it is more fan-service intensive, owing to the fact that everything is revealed for the male portions of the audience, with the breasts becoming unfettered and the sheer amount of nakedness that abounds in the show. Plus the fact that some of the women are heavily endowed, it is geared more towards a male fantasy realm and could be seen as not much different than “Ikki Tousen” or “Sekirei”, where the hefty women flounce and bounce but do not care for each other’s company in that manner (if it’s Lawn Darts, that’s something different).

Alas, he rebutted with the notion that some of the ladies seem to enjoy the relationship and with one of them blatantly S&M, one has to at least acknowledge a heavy yuri influence. He also went on to state that with a massive dearth of men in the show, it emphases how really yuri it is. He then referenced “Cross Ange”, where there were some sexual shenanigans going on and he always felt that was yuri, since the lack of mana problem was always through the female line, thus intentionally setting up the situation.

I retorted with that some of those ladies in “Cross Ange” were doing it more for a caliber of release than any kind of genuine love and devotion, but he came back with ‘then why show it at all?’, which brings up an excellent point. Why show it at all? A decision had to be made somewhere along the line to present all of this to us. True, a lot is predicated on the original manga, which gave us the story and characters and situations and the later conversion into the anime, keeping those elements. But how critical is/was it to show it? Perhaps my resistance is to how it was done, to convert from foxy babe to bodacious weapon, as the ladies are rather crass and crude with their approach, which then gets repetitive. And boring. And since ALL of them must conform to transform, there you go. I guess there is no time for niceties and so we have to go whole hog to get you hot and make you change out.

It’s just for me, yaoi and yuri are intensely dull, to the point that it puts me to sleep. Some of the yuri unfolds so slowly and quietly, I nod off (as I did with a showing of “Flowers”). And I just can’t connect with the overall story, so I leave it. But this one was action-packed. However, there was still a huge amount of time invested into the transformation sequence to the point where I felt it counter-balanced the larger story, flooded under by all the shenanigans. Understand that there is nothing, overall, wrong with yaoi or yuri, just like there isn’t anything wrong with lima beans. It’s just that, if presented with it, I will choose not to partake. You want my portion? Help yourself.

So, what is the tipping point for something to be yaoi or yuri? Do we include “Venus Versus Virus” and “Strike Witches”? And where does “Sailor Moon” hover? What about “KashiMashi”? That one is a real head scratcher, as he was a guy who was crushed by a space ship and reconstructed as a girl. He has manly feelings for another girl, but as a physical girl, does this change the game? What about “Revolutionary Girl Utena”? Is a strong woman automatically yuri? It seems the more questions I ask, the farther away I get from a definition. It may be the Tootsie Pop Conundrum: the world may never know.

As to “Valkyrie”, I will leave that to your discretion. Unless I see the ‘Yuri Fan’ icon on the DVD case (as I have with “Simoun”), I will keep this as fan service heavy non-yuri.

It took me about 40 years and seven valiant attempts to finally enjoy anime. Whether I grew into it or the stories got better, things have been percolating along since 2004.
View all posts by The Droid →
Tagged  Commentary, Valkyrie Drive Mermaid.
Bookmark the permalink.