A feature article called “Five Steps to Better Fanservice” went up on ANN this week. Its author, Paul Jensen, made some good points about moderation and setting audience expectations early on in a series. However, the piece’s focus on the common interpretation of the term “fanservice” with regard to anime – body parts, hot spring/beach trips, etc. – left me a little disappointed after I finished reading it. I began to think about other types of fanservice and remembered an old post of mine that briefly touched on that notion. 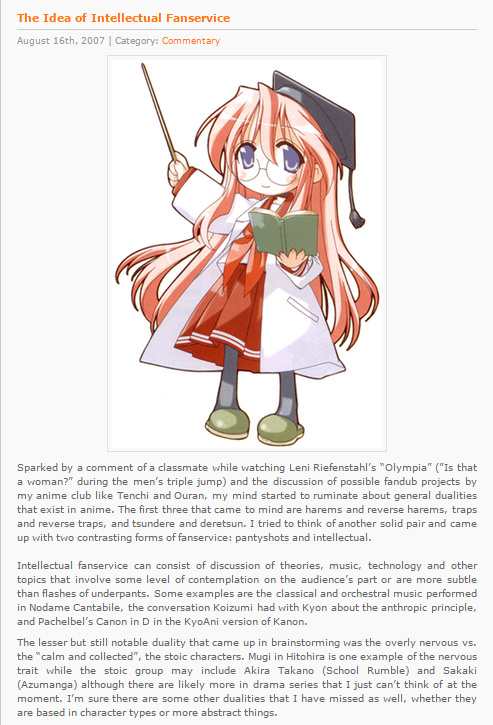 It’s been about eight years since I wrote “The Idea of Intellectual Fanservice” on a previous iteration of this blog. Looking back at it now, I’m surprised at how short that post actually was. I was in Germany at the time as part of a one-month summer study-abroad program and my Internet access was limited to occasionally open computers at a university and a couple of net cafes in town so I couldn’t really sit down and type for extended periods of time. I can see how I might compose it differently in 2015 with less of a focus on dualities and more on intellectual fanservice as just one form of alternative fanservice.

A bunch of anime series have debuted since the summer of 2007 that feature bodily fanservice – some that came to my mind while writing this post were Cat Planet Cuties (Asobi ni Iku yo!), Kill La Kill, Highschool of the Dead, Strike Witches, To Love-Ru, High School DxD, and Infinite Stratos among many others.

There are also some series that managed to be bawdy without having much visual titillation like Seitokai Yakuindomo, Panty & Stocking with Garterbelt, and Azazel-san. I guess MM!, Hen Zemi‘s TV series, Shimoneta, and Seitokai no Ichizon could perhaps fall into that category but I haven’t watched any of those yet so I can’t really speak much about them from experience.

So what are some forms of alternative fanservice as opposed to carnal ones?

– There are shows abounding with Japanese cultural references such as Sayonara Zetsubou Sensei, Joshiraku and Hozuki no Reitetsu.

– There’s also ones that deal with high-minded concepts and theory like Kaiba, Madoka, Penguindrum, and Yuri Kuma Arashi.

– Musically-focused series like Nodame Cantabile and Sound! Euphonium feature characters performing pieces that some viewers might remembering playing on instruments in the past or seeing and hearing those performances may just bring back certain musician or listener experiences.

– Culinary-themed series such as Food Wars, Gourmet Girl Graffiti, and Toriko contain what you could call “food service” with characters shown cooking and eating appetizing dishes.

– Sega Hard Girls is an instance of retro game-related fanservice with its boatload of references to characters and titles from Sega’s long history.

– Emily wrote a post in April about The Disappearance of Nagato Yuki-chan and its visual callbacks to elements from the greater Haruhi franchise. That’s in-franchise fanservice in a way.

Before wrapping up, I wanted to bring up high-quality fluid animation that’s sometimes classified as sakuga. The portion of the overall anime audience that pays close attention to fantastic cuts and certain animators’ work is a interesting group to me since they spotlight stunning examples of artistry in motion and dig deeper than someone who would look at the same clips and be satisfied in saying “that looks cool!” before moving on.

However, I think I’d be reaching if I called sakuga a form of fanservice compared to the other forms I mentioned earlier. A particular animator will work on many different projects and the appreciation they’re given by that community seems to be more focused on the style and techniques they use. There are fans of individual animators, directors, writers, voice actors and production studios but I feel like those are somehow more specific than, say, shots of beautiful-looking food. I don’t know, I can’t nail down why I’m separating that from the rest…

Thanks for reading. This topic worked much better as a post than as a string of tweets the way my thought process works. Feel free to point out where I’m wrong about aspects of shows I mentioned and if there are better examples I should have used. I know there’s probably more cases of alternative fanservice in various manga series over the decades but I figured I would focus on anime first since I lack the breadth of knowledge to include many manga examples.

I have been blogging about anime for more than a decade. My other interests include sports, business & legal affairs, and philosophy.
View all posts by Tom →
Tagged  Anime, fanservice.
Bookmark the permalink.