At Anime Expo 2011, I bought a book called Anime Poster Art for a discounted price of $5 from Akadot/DMP’s dealers hall booth. I looked through it at the time, intending to write something about it, but I didn’t get around to doing so.

Four years later, I found that two similar poster-focused books from the same cocoro books imprint – Japanese Movie Posters and Silver Screen Samurai – had cheap listings on digital storefronts such as Amazon’s Kindle store. I decided to buy both to go along the physical copy of Anime Poster Art that I still own. 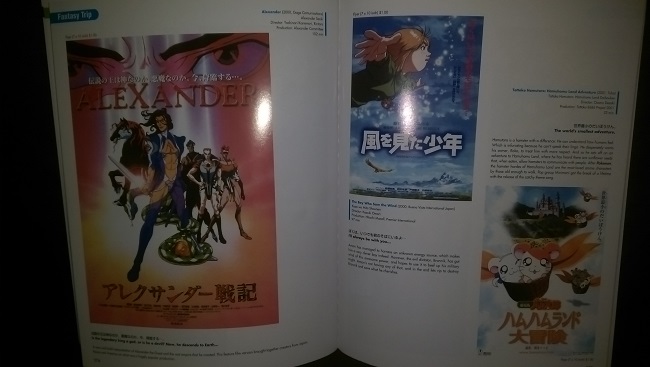 A spread from Anime Poster Art.

The anime and general Japanese movie poster books have different sections based on genre (e.g. yakuza, robots) or studio, in the case of Ghibli, while the samurai film-focused one is ordered chronologically and divided into time periods (1935-1959, 1960-1969, 1970-1989, 1990-2003). Anime Poster Art features English translations of the “catch copy” taglines on the posters and plot summaries while Japanese Movie Posters & Silver Screen Samurai provide some background information about the films. Each one also has side columns between chapters that focus on particular actors, directors or other industry details.

One issue I had with the Kindle versions of the samurai & general movie books was that the information under each poster can look small when viewing on a tablet or smartphone and there was no real way to zoom in. The anime poster book doesn’t have this issue because it seems to be properly formatted. I looked at the Google Play samples and since those are basically scans of the original books, I was able to zoom in and read the text under the pictures. Each of the three eBooks are about US $3 across various digital stores (Kindle, Google Play, iBooks).

Something I thought about when I browsed these books was how many of the movies featured in them have been localized in English. The majority of the anime films have been either released on DVD in the US or fan-translated but many of the samurai films from the 1940’s to 1960’s and the yakuza films from the 1960’s & 1970’s aren’t as easily available. I did happen across a website with reviews of some older samurai and yakuza films so I was able to get more of a sense of their stories. However, I’d still like to sample those classics for myself sometime.

The books are worth checking out if you’re interested in an aspect of Japanese film history, especially at their current digital prices (compared to the $20 cover prices of the physical versions).

I have been blogging about anime for more than a decade. My other interests include sports, business & legal affairs, and philosophy.
View all posts by Tom →
Tagged  Anime, books, Japan, Movies, poster art.
Bookmark the permalink.